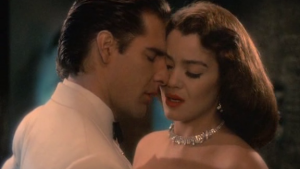 In an episode that’s a hat tip to film noir classics, Sam is Nick Allen, a private detective in 1953 Brooklyn. When Sam leaps in standing over the body of Nick’s dead partner, he must find the killer before he himself is knocked off by a dropper called Clapper (no cure for that in 1953!), and his girlfriend (also his dead partner’s widow) disappear.