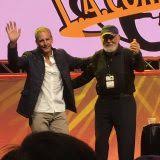 At the L.A. Comic Con in late October a few weeks ago, Scott Bakula and Don Bellisario appeared in a panel, and DB announced he has written a new script for “Quantum Leap”, which would be an essential reboot of the series.

In a brief episode for the Thanksgiving week, Sam and Dennis discuss the possibilities of a new future for “Quantum Leap”. What are you thoughts? Let us know…